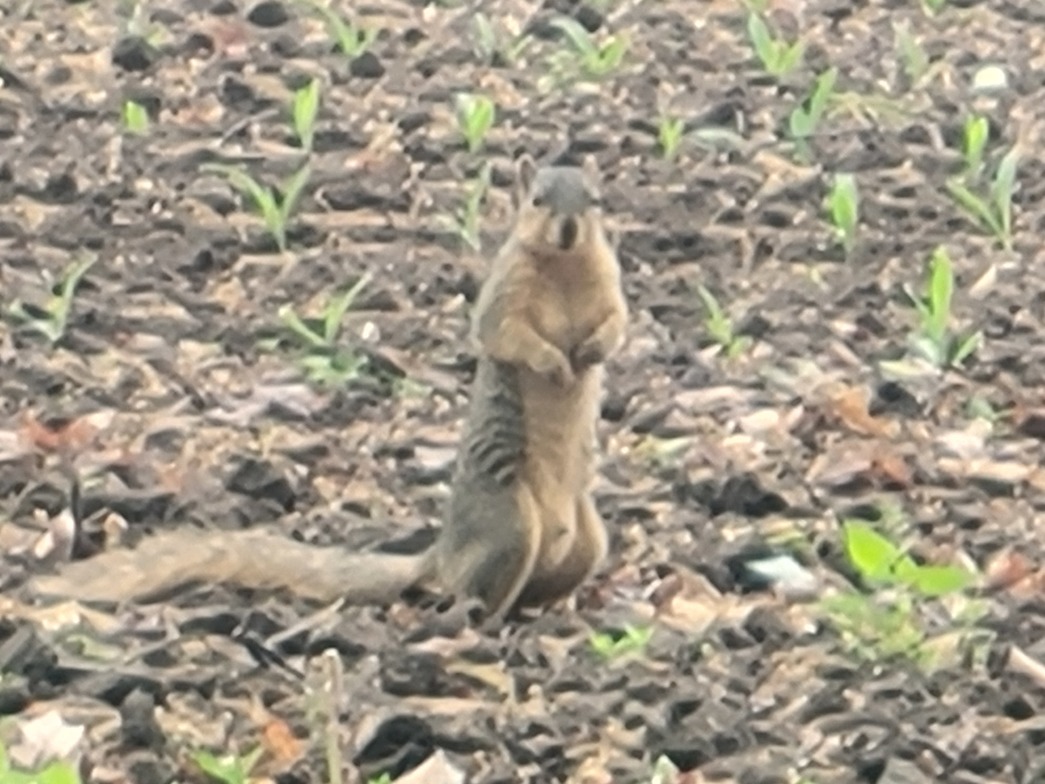 I was looking out my window at the field behind our house. It had just recently been planted and the corn stalks were just starting to break through the soil. I stood there taking in the transformed scene of a recently weed filled field, plowed down to brown dirt, and now tinted green with new life. I began to think about how it will look just one month from today, you know, "knee high by the forth of July". Better yet, I began to imagine the backyard closed in by the towering stalks of corn.

It was about this time that I noticed that I was not the only one taking in the scene. There was a squirrel in the field. I watched the squirrel work to rescue what appeared to be nuts from the field and replant them in the yard. Then I noticed the squirrel stop and pause and seemingly gaze into the distance. Other imagery began to invade my mind. I began to imagine the squirrel attempting to get to an ear of corn some tricky human had placed precariously atop a greased pole or a piece of corn on a trap intended to flip the squirrel upside down as soon as he lay a paw on the corn. I imagined how determined those squirrels are to get that elusive single ear of corn. That's when I began to wonder what that little squirrel must be thinking as he gazed out over the acres and acres of freshly planted corn. Who longs for the harvest more, the farmer or that lonely little squirrel? Little did I know that the field behind my house was filled with dreams.

I was reminded of the parable Jesus told, Jesus said, “The kingdom of God is as if a man should scatter seed on the ground.  He sleeps and rises night and day, and the seed sprouts and grows; he knows not how.  The earth produces by itself, first the blade, then the ear, then the full grain in the ear.  But when the grain is ripe, at once he puts in the sickle, because the harvest has come.”

When we started this process of planting Creator's Praise Ministries we talked about how we didn't just want to build a church but grow God's kingdom. We want to save souls and make a difference. It starts with a dream. But here's the thing, it's God's dream. The squirrel could dream about what might come in the future but the truth is, it's not his field and its not his corn. When we dream of the kingdom work before us, we should start by remembering who owns the field and provides the seed. We may till, plant, and water but ultimately God will make it grow. Moreover, when the harvest comes, the produce belongs to God.

Still the dream persists. We sleep and rise, night and day gazing into the field, inspecting the matuity, scrutinizing the growth, anticipating the harvest, and when that time arrives we must be equally ready to bring it in. Who longs for the harvest more, God, or the workers who are part of the harvest? What is stopping us from dreaming? For, we dream of those who will receive glory, and all the while remember that we also are among that glorious host. The dream is part of a plan that when acted on brings a blessing to everyone who dared to share it. It's God's dream that He shares with us. So, why imagine only a cornel when there is a whole ear? And why do we only see a single stalk, when God has assigned us a field? Why do we focus on a congregation, when God has called us to a kingdom? And why do we only want to make disciples of a few, when God has commissioned us to make disciples of all nations? Call me nuts, but I'm with the squirrel. Dream BIG!